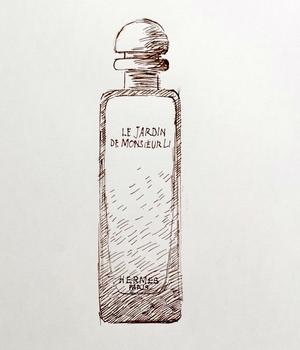 Perfumes can suggest many things. They can be uplifting, outrageous, disgusting, sexy, hard, delicious, warm, cold, luxurious, even sad. It might seem a bit far-fetched to describe a perfume as silly, but that’s what I think of Black XS by Paco Rabanne, and it’s also why I like it.

Created by Oliver Cresp (co-creator of Thierry Mugler’s love-it or loathe-it Angel) at perfume powerhouse Firmenich and licensed to fragrance multinational Puig, Black XS was launched in 2005. Its black-glass flip-top bottle originally came in an outer slip-case with a shirtless photo of the English model and amateur boxer Will Chalker, which added to its charm.

Packaging aside, its appeal is pretty simple: pump the spray button and you get an unexpectedly fruity blast of ripe strawberries – sweet, girly and completely at odds with the rather Gothic / Twilight-style design and lettering of the bottle. It’s not what you’d call a complex fragrance, but occasionally it’s fun to forget about trying to be cool and sophisticated: perfumes, like people, can sometimes take themselves too seriously, and there’s a silliness about Black XS that makes me smile every time I spray it on.

What’s really funny, though, is that Black XS doesn’t actually have any strawberry in it at all – at least it’s not among the official list of ingredients. What it does have is lemon, calamanzi (a kind of orange native to the Philippines), sage and what most perfume sites describe as ‘tagete’, which I’m assuming is an illiterate corruption of Tagetes, the Latin name for marigold.

The Mexican marigold, Tagetes erecta, is the source of an oil used in perfumery because of its attractive appley scent, and I wonder whether it’s the combination of orange, lemon and apple that fools my nose into thinking that what I’m really smelling is strawberry? If the effect is intentional it’s dead clever, but it’s the kind of thing that professional perfumers do all the time. Personally I think it’s magic.