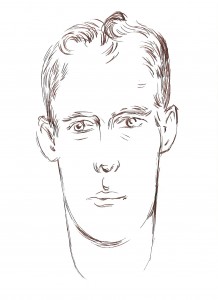 The Sniff Box is written and illustrated by writer, editor and trainee bell-ringer Christopher Stocks.

I’m a London-based writer and editor, who has worked and written for many leading magazines and luxury firms. My magazine career began on the fashion and society glossy Harpers & Queen, followed by stints at ES (the weekly magazine of the London Evening Standard), and as deputy editor of Sky magazine.

More recently I’ve done stints as the features editor of House & Garden and the lifestyle and beauty editor at Wallpaper magazine, which I’ve contributed  to since its first isue. It was for a feature on the perfume industry in Wallpaper that I won a Jasmine Best Newcomer award, which began a continuing passion for the subject.

My interests range from the refined to the earthy, having edited magazines for Coutts bank, the Dorchester, Meurice and Plaza Athenée hotels and the superyacht resort Porto Montenegro, written a weekly gardening column for the Independent on Sunday, and worked on projects ranging from Abercrombie & Fitch Quarterly to copywriting for the development of São Lourenço do Barrocal.

I studied contemporary British and American poetry at Manchester University with the poet and publisher Michael Schmidt, and my poem, Scott of the Riviera, won a Bridport International prize. Forgotten Fruits, my first book, was published by Random House and shortlisted for Food Book of the Year by the Guild of Food Writers, as well as for the André Simon Award. A social history of British food, it was chosen by Monty Don as his favourite book of the year.