Tagged With ‘“Must de Cartier”’

‘This new masculine scent sensation is perfect for grand evenings – an impulsive perfume capable of sweeping away taboos, brazenly daring to say the unsayable and conjuring up moments of unforgettable bliss. Like a magic wand, it unleashes the emotions and feelings…’

Yes, it’s perfume bollocks time again, though at least this time at least it’s for rather a nice scent: Cartier’s Déclaration d’un Soir. Launched in 2012, it was created by their in-house perfumer, Mathilde Laurent, and like Cartier’s earlier (and now quietly discontinued) Must de Cartier Pour Homme, it has a surprising amount of rose in it for a men’s fragrance.

But don’t let that put you off: just as there’s no reason (in the right context) that a man can’t wear pink, so there’s no reason that the scent of rose, if it’s mixed with the right ingredients, has to smell floral and girly. That’s the brilliant trick of Serge Lutens’ Féminité du Bois, which – figuratively speaking – puts the smell of rose in a rather masculine cedar box.

Déclaration d’un Soir isn’t as striking as Feminité du Bois, but it’s got an appealingly plush feeling, with a slight (and not unpleasant) hint of damp soil. Déclaration d’un Soir does have a woody side to it, too, but in this case Mathilde Laurent has used sandalwood, which adds its own sweet spiciness to nutmeg, cumin and pepper.

(Incidentally, what is it about recent men’s perfumes and pepper? Virtually every ‘mainstream’ scent I’ve smelled in the last few years has reeks of the stuff, as if some secret society had ordained that all men’s perfumes had to include masses of pepper. I guess it’s just a fashion, but it makes most of them smell about as subtle and appealing as a pepper spray or a short-circuited computer. Luckily the pepper in Déclaration d’un Soir is pretty restrained.)

It’s a nice scent, as I say: warm, rich, long-lasting and – to my mind anyway – completely unisex. The only shame is that it comes in such a fussily designed bottle (the same as Cartier’s best-selling Déclaration), with its silly clip to stop you depressing the spray-top instead of a cap.

Far more of a shame, though, is the fact that Cartier have given up on Must de Cartier Pour Homme, which I liked even more and which came in that rarest thing: a really beautifully designed bottle. But that’s the perfume industry for you: a triumph of economics over aesthetics. 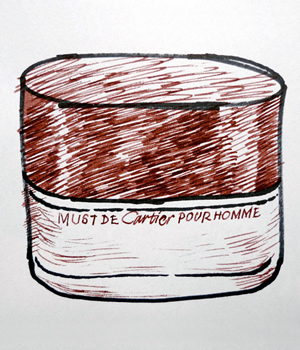