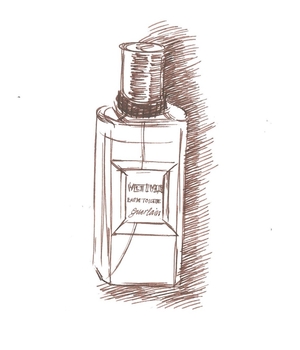 If I had to choose a single perfume from all my favourites, then Guerlain’s Vetiver would be a strong contender. I’m not, I have to admit, entirely sure why, since it’s not the most mysterious or unusual scent I know, but there’s something about its combination of zest and earthiness that’s sexy, tough, and powerfully alluring.

Created by Jean-Paul Guerlain and launched in 1961, Vetiver is, for many people, the ultimate masculine fragrance. Maybe it’s something to do with the way that, when you first spray it on, you get an instant hit of cirtusy cologne mixed in with a whiff of tobacco smoke – like taking a hit from a good cigarette, back in the days when smoking was still thought of as sexy and cool.

But the great thing about Vetiver is that it lasts – and lasts, and lasts, keeping that combination going for longer than might seem possible, largely thanks to the appealingly bitter fresh-earth smell of vetiver. One of the greatest of all natural raw ingredients, vetiver (Vetiveria zizanioides) is a tropical grass that grows wild in southern India, Sri Lanka and Indonesia, but is widely cultivated for perfumery, especially in Haiti and Réunion.

Vetiver oil is steam-distilled from its tough, fibrous roots, which can withstand long periods of both drought and flooding – a bit like the dreaded couch grass that is the bane of British gardeners’ lives. Apart from its extraordinary aroma and staying-power, vetiver oil also has the added advantage of ‘fixing’ other scents and making them last longer too.

Vetiver may be a superb perfume ingredient, but of course it’s only that – an ingredient – and while it plays the leading role in Guerlain’s Vetiver, it’s far from the only component of the scent. For anyone who enjoys olfactory guessing games, see if you can smell some of the others. Among them are things that are more often associated with cookery – coriander, pepper, nutmeg and possibly a touch of chilli extract – which add some extra spice, as well as woody cedar oil. The zesty citrus freshness that you first smell comes from a combination of things like mandarin, lemon, bergamot (from the peel of bergamot oranges) and neroli (from the flowers of Seville orange trees).

Over the years the original recipe is supposed – like so many other supposedly classic perfumes – to have been mucked about with, and the current incarnation is said, by some perfume obsessives, to be not a patch on the original. That’s a shame if it’s true, but short of Guerlain reintroducing the original version (which it probably couldn’t anyway because the regulations governing the use of fragrance ingredients are so much tighter now than they were in the past), we’re stuck with what we have. And what we have, to my nose, is still pretty amazing.

Vetiver is one of those masculine scents that smells so hot I’ve heard of people being followed down the street by total strangers, unable to tear themselves away and desperate to discover what perfume the object of their attention is wearing. Forget all about the so-called Lynx Effect, which has more in common with the Neutron Bomb Effect: Vetiver is the real thing.