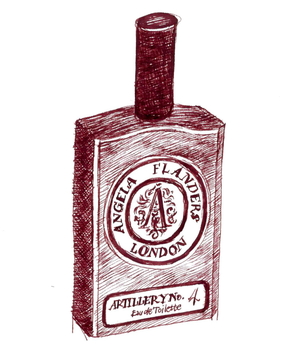 Picked up for a fiver in a Vogue House charity sale, entirely on the look of the bottle (you had to move fast), Artillery No. 4 turns out to be an unexpected treat. Launched in 2012, it was created by Angela Flanders, an English perfumer whose scents have an appealingly home-made quality which extends, in this case, to the label’s hand-written ‘4’.

The name is a nod to the location of her shop in Artillery Passage, a splendidly Dickensian alleyway just east of the City of London. But it’s also a good choice for this particular perfume, as No. 4 has a whiff of gunpowder about it, or at least a hint of bonfire-night smoke.

It’s actually based around vetiver, the earthy-smelling tropical grass root that gives a bracingly bitter character to many classic men’s fragrances, but for once vetiver plays a fairly discreet background role. The first thing I smell, apart from that smokiness, is lavender (lots of it), another classic male scent – this is a very masculine fragrance. It’s spicy without being overpowering, with a gentle touch of orange provided by bergamot oil.

I like Artillery No. 4 a lot, though it’s not particularly long-lasting, which is unusual in a perfume that’s based on vetiver. It also comes in a simple yet attractive bottle, which is more than can be said for so many fragrances these days. How nice to stumble across a fragrance that deserves to be better known.